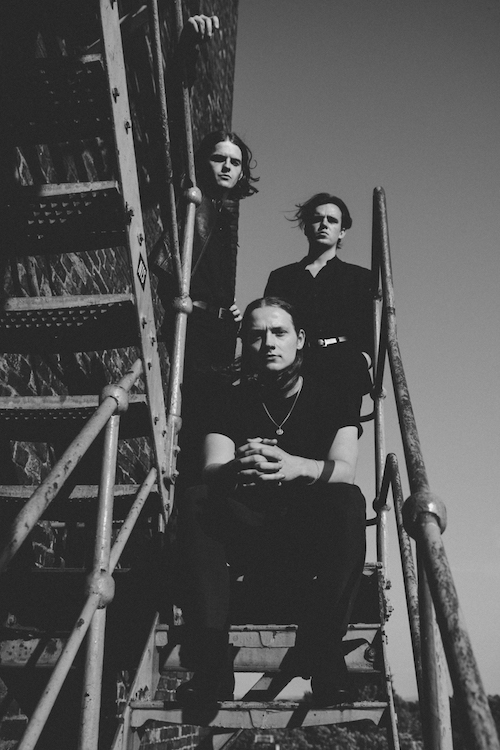 ‘Columbia’ by The Blinders is a very exciting debut.  I’ve got a lot to say about this so I will endeavour to guide you while I meander down a trail of highly charged emotions.  This is in part due to the feeling you get when you watch a great band over a period of 18 months work harder than anyone to improve their craft, and then finally see them reap rewards for their efforts.  This is slightly tarnished by the knowledge that soon they will not feel like ‘your band’ anymore, as their popularity inevitably grows.

First of all, credit has to be given to the album’s producer Gavin Monaghan, who has captured the essence of what it is to witness The Blinders in their live setting.  And on one level, this is what ‘Columbia’ is; an accurate snapshot of the electrifying live performances given by the band over the last 12 months.  This should not be underestimated, because it is significant for two reasons: firstly, the decision to leave the band’s sound untouched (unlike for instance Martin Hannett’s choice to reinvent Joy Division) and secondly, to not change the songs’ arrangements at all.  This means that older fans who have already seen the band can relive those gigs, and new fans who buy the album first can see the songs played live later, exactly as they appear on the record.

It is not an easy thing to do, particularly when a band has such a powerful live sound; trying to translate that live energy in the confines of a sterile recording studio so fans at home can feel the same level of excitement, doesn’t always happen.  The producer’s job is to condense raw emotion and the blood and the sweat and the make-up, into compressed ones and zeros.  I remember seeing Skunk Anansie live a few times before their first single was released, and feeling massively disappointed when I heard the clean, deflated studio versions of those songs.  Gavin Monaghan and the band have worked hard to create an album that sounds powerful and raw.

In some ways I guess that means there are no real surprises here if you have already been to a Blinders gig.  But I don’t think this is the time for surprises.  This is The Blinders’ debut; it is their statement; it is an accurate account of where they are today.  There are no pretensions here.  It is honest, it is heartfelt and it is absolutely essential listening.   For those new to the band their sound is a blend of bass heavy Killing Joke and vibrato guitar surf-punk Dead Kennedys.  Charlie’s bass sounds better and more powerful than ever now and this is noticeable if you have heard the two tracks that were re-recorded for the album: ‘I Can’t Breathe Blues’ and ‘Brave New World’ (both released earlier as singles).  The difference in production and performance is startling, as if the original versions were demos.  I guess all the gigs they have played over the last year have sharpened their playing and given them the confidence to really go for it in the studio.  Matty’s drums also feel more fluid than on earlier recordings and they sound massive in the mix.  My only minor criticism is that the guitars were not used more effectively; for the most part there is a left and right channel guitar, but they are playing pretty much the same thing instead of adding another melodic or rhythmic layer… I know this would have meant that it could not have been reproduced live, but still I believe it was a missed opportunity, especially if this recording is to be played over and over.  Repeat listens often uncover hidden layers on an album, whereas ‘Columbia’ may be delivering everything immediately in one pulverising blow.

Thomas’ vocal performance particularly is brimming with confidence and he has been allowed to scream and growl to his heart’s content, rather than capture a nice clean vocal take.  There are sections where Thomas is delivering lines like a beat poet or Gil Scott-Heron.  The section in ‘Orbit (Salmon of Alaska)’ when he speaks of society’s desire for nostalgia at the expense of forgetting the present, echoes almost exactly the content and sound of Scott-Heron’s soliloquy in ‘B Movie’ from the 1981 album ‘Reflections’: “this country wants nostalgia.  They want to go back as far as they can …  Even if it’s only as far as last week.  Not to face now or tomorrow, but to face backwards”.  Also on ‘Free the Slave’, Thomas’ eloquent spoken rant ends abruptly with the glorious line: “Free the boy about to become a man… in a society like this, who the fuck would want that?”  He is giving the answer and then immediately smashing it with the reality faced by so many working class kids in this country; we are only as free as we are allowed to be.  This is investigated further in the lyrics of ‘Rat In A Cage’ where we are invited to break from our cages, to hold each other and join together in some kind of protest, or just for solidarity.  The vocal is imposing throughout the album and only moves from being a throat-tearing scream on a couple of tracks, most noticeably the album’s ‘ballads’: ‘The Ballad of Winston Smith’ and ‘Orbit (Salmon of Alaska)’.  These songs give a welcome contrast and depth to the band’s canon after the ear hammering from songs like ‘Gotta Get Through’, ‘Hate Song’, ‘Et Tu’ and ‘Brutus’.

The album is loaded with historical, political and literary references, which for some will no doubt pass them by totally, whereas for others they will spend a lifetime trying to work out some hidden, higher meaning.  I have yet to see anything from the band specifically explaining anything and maybe that is for the best; mystery is always better than a diagram or a map.  It is worth looking out for the following though: Charles Manson; Louis XIV and his current incarnation as Trump; Shakespeare’s Julius Caesar; Orwell’s 1984, including its central character and his fear of rats; Aldous Huxley; the Wall (Warsaw, Berlin, The West Bank… Mexico?); the crucifixion; Eric Garner; The Beatles; and Columbus.  I wonder with the album title whether they are making a statement about Britain’s Americanisation, where the UK is actually Columbia (the USA’s original name after being ‘discovered’ by and named after the great Spanish explorer), and like Matt Johnson’s The The, The Blinders are suggesting we are now America’s 51st state – UKDC?  It may not be a totally new idea, but it is certainly one that needs re-addressing to remind us who pulls the strings in the offices of power.

The album’s subject matter is pretty dark and not for those with either a right wing bias or no interest in politics at all.  The Blinders wear their hearts on their sleeves and they are not afraid to voice their concerns about the injustice in the world.  This could make for joyless experience if it weren’t for the absolute conviction and energy of the deliverance.  The fact that the lyrics are bursting with meaning and the execution so engaging means you can’t take your eyes or ears off them.  There is some hope amongst this seemingly bleak landscape and that is ‘Rat In A Cage’.  After the previous ten songs of stark almost journalistic reportage, hearing the line, “Come together we need each other”, is like a blinding light in the fog.  I really wasn’t expecting that and it made me really emotional to hear those words.  I did wonder whether this track would be released as a single in its own right, with its James-esque ‘Sit Down’ rhythmic tom tom pattern driving the song and its message of optimism.  This is further boosted by a fine harmonica performance and an inspired backing vocal chorus of ‘Woo woos’, which conjures up either ‘Sympathy For the Devil’ or even ‘Midnight Train to Georgia’.  I urge you to listen to this album from start to finish, to feel the full impact of getting to track 11 and experiencing the release of tension at that point.  Turn off the shuffle, sit down, turn off your phone and plug yourself in… it is worth every ounce of your attention.

Although melodically or harmonically there is nothing spectacular going on in these songs, rhythmically and lyrically they have produced a powerful listening experience.  There are times when you can hear a Sex Pistols’ influence on the song-writing and guitar playing, with overdriven barre chords taking centre stage — indeed, in the line “I am the state” from ‘L’etat c’est moi’, with the “I” extended over 2 bars,  it sounds as if it is going to end with “I…. wanna be anarchy”.  The Blinders are more adventurous though with tempo changes and the occasional use of extending the bar by a beat to offset the 4/4 time signatures that dominate their writing.  The Pistol’s debut has lasted well and still sounds timeless now and I believe ‘Columbia’ will as well.  Furthermore, even on the album you can see a progression in the song-writing already; from the stomping simplistic track 1 ‘Gotta Get Through’ to track 12, ‘Orbit (Salmon of Alaska)’ an apocalyptic song featuring a more complex melody and a heavily reverbed piano in the arrangement for the first time, the development in writing and orchestration is an exciting indication of what is to come.

How important is this release going to be?  Personally, I’ve waited for a band to make an album like this for twenty, maybe thirty years.  Political albums can often deter because they are hard work, but they do endure… I’m thinking about albums by Gil Scott Heron, The Clash, Billy Bragg, Public Enemy, Manic Street Preachers, The The or Dead Kennedys.  When the political scene is as warped and cruel as it is now, music should comment on it and be influenced by it.  The Blinders are making music to mark their protest; there should be more like them.

The album ‘Columbia’ is released on 21 September through Modern Sky UK Records in multiple formats.  Get your order in now; make mine a vinyl please.

Also the 19 date UK tour to support the album kicks off in Manchester on 15 October and is already selling out fast, so you better be quick if you want a ticket.  They visit Birmingham’s Castle & Falcon on Tuesday 23 October — I better see you there.

Image of The Blinders by Sam Crowston provided by PR.